Hello there!
Tonight I managed to finish up a little something and thought I'd do a little bit more than just another Facebook post.
During December I was involved in a secret santa where we had to send one another a model and have it painted by the end of January. When my parcel arrived, I was delighted to find a model that's been a favourite of mine for quite a while, a lovely old citadel barbarian 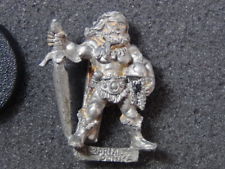 Look at him, all noble

Now, as happy as I was to get this guy, I do already own him, and have painted him accordingly 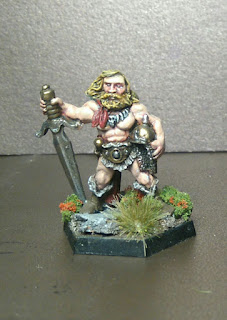 While there was no question of the new arrival being painted, I didn't just want to do another standard job, and as it was a gift to boot, I wanted to do something special with him. I've had an idea bubbling at the back of my head for a while, and so took the opportunity to try it out.
A few hours later and a bit of a think about some background and here we are, with the story of.....


Bjarke Caldersson, the Beastkiller. Eldest son of a chieftain, his sword had bitten countless times in defence of the tribe. He earned his name during the murder-make against the savages of the deep woods, those who lay with demons and begat monstrosities that would prey upon the woodsmen and their families. Bjarke took four of the beasts himself that day, a feat unmatched by any in his tribe. Marked for greatness, he was loved by his people and sat with honour at his chieftains side at the feast. And so it was until the völva came to the chieftain with dire portents of a new evil in the woods, a necromancer who had taken advantage of the relative peace afforded by the slaughter of the savages and begun the looting of the ancient cairns. Of course Bjarke was the first to offer his sword to the cause and he and his warriors ventured out amidst great fanfare, shouting boasts to the crowds that gathered to see them off.
Weeks passed with no word, until one night a shriek of agony split the air. Torches and weapons were gathered, and the gates of the chieftains stockade were thrown open just in time to witness the return of Bjarke. The first of those rushing to meet their returning hero came to a dead stop as they got close enough to see the pallor of his flesh, and the witchlight glowing in his one remaining eye. No notice was paid, however, to the fact that his cloak, once the rich red of his tribe, was now displaying the colours of another master. Bjarke dropped the head of the völva he had been carrying and hefted his sword.
The sun rose on a field of the dead, and the draugr that was Beastkiller returned to his new "chieftain" . 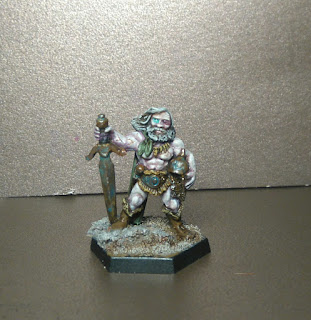 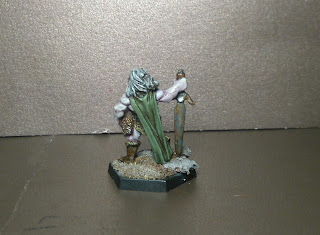 So there you go folks, thanks to you for looking and thanks to my secret santa for the model! I've got a bit of a bee in my arse to expand on this idea a bit more in the future, so watch this space! 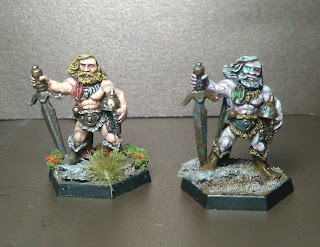 Don't fuck with a necromancer