Hello there! Time for another trip to the dark woods, lets see whats been happening

A storm is brewing..

Schwarzweald is on high alert. Marshal Ulric is drilling the militia harder than ever while the Giehardts are on constant patrol aided by Bolga, whose eyes and ears in the forest have been tracking and reporting back for weeks now,while a runner has been sent out into the world to try and recruit extra sword arms for whats coming.
Hermann Giehardt returned battered and exhausted from a deep patrol a fortnight ago, and the news was grim. There are orcs abroad, and judging by the totems they're leaving to mark their path, the White Tusks, a pack of mercenaries feared throughout the region, are on the warpath. 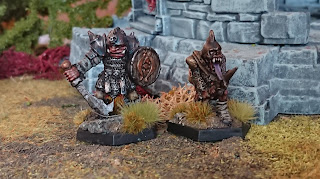 Morgash the Tusklord has fought from the Border Princes to the Badlands and beyond, his mercenaries following him in cutting and burning a path across the old world. He has fought and bested hundreds of opponents down the years, not caring a jot for the reasons other than the rate his "clients" are paying. What he's doing in the deepwoods around Schwarzweald remains to be seen, but its a certainty that he'll gladly put the village to the sword to keep his boys sharp whether its his objective or not.
Uthmog has followed Morgash since the beginning and is the perfect lieutenant, a whirlwind in combat without a scrap of ambition to lead which allows Morgash the luxury of concentrating on the task at hand instead of watching his back constantly.

Borch and Grundle are the longest serving members of the White Tusk after Morgash and Uthmog and are as aggressive and skilled as you would expect from battle hardened orcs. They share as close a bond as orcs can, but are aware of a shift in the mood of the warband recently. Theyre not sure if they care or not yet, but there seems to be change in the air all the same.
That change, if it happens, will be brought about by Slig - the nastiest piece of filth you could have the misfortune to meet. Of course, as an orc in the company of his fellows this isnt a massive issue, and Morgash uses Slig for the most horrific and distasteful jobs, the most recent of which was slitting the throat of an elderly healer in a town on the outskirts of the Drakwald. The village itself is currently in the grip of a particularly nasty epidemic, and the Tusklord was charged with making sure that it didnt recover. However, Slig, the nasty little bastard that he is, kidnapped and slowly tortured the healer to death with her own ritual dagger instead of getting the job done quickly. Before she finally died, the healer cursed the blade to never allow Slig a moments peace and now it whispers to him constantly, pushing him to challenge Morgash for leadership and mocking his abilities. The only realistic outcome to such a challenge is Slig broken and left to die in a hole, but if he was to get lucky the warband would collapse without the strength of Morgash's will to hold it together
Viggut has noticed the change in Slig more than the rest of them, and is struggling between letting things play out and telling Morgash what's going on. Most orcs, being self serving creatures would normally run to the boss at the first opportunity but Morgash has a habit of breaking informants along with the transgressors theyre uncovering (for "disloyalty" he says), so for now Viggut is keeping his teeth together 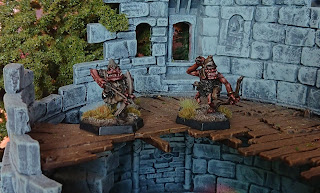 Trackers and hunters for the group as well as missile support, Hogg and Barse are a rare type of orc that doesnt like to get up close and personal, so Morgash drills them mercilessly with their crude bows, and regularly reminds them that on the day they stop being useful they'll be thrown to the rest of the pack for sport 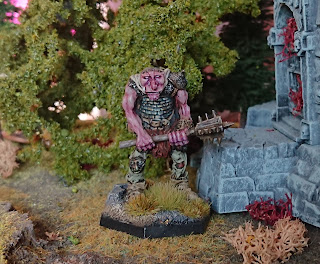 Ever since Morgash stormed into his cave and beat him senseless, Marrowbelch has been a part of the raiders group and a very valuable addition. He bears no ill will towards Morgash whatsoever, in fact he is in awe of the orcs prowess considering Marrowbelch snapped his arm like a twig in the opening moments of the fight and still came out with a savage beating. And anyway, life with the White Tusk with all its fighting and looting is a massive improvement on roaming the foothills looking for merchants to ambush and devour, so hes quite happy with his lot these days!

There yis go, another intermittent chapter of village life in a haunted and dangerous forest, hope you enjoyed it and I'll hopefully see you soon!