Another blog post? You lucky bastards! Hope you're all coping under whatever lockdown you're experiencing and following protocols, if not, stop being a cunt and spoiling it for everyone else, yeah? Sound. Anyway, strap in, here we go again!

Now, I've posted about orks before, the last time being here, and back then I was fairly happy with how things were going. But then all of a sudden I wasn't.
Like a lot of you, I spend a lot of time losing hours to browsing other people's blogs, and a few of the ork armies I was seeing really bothered me. Not because they werent any good, far from it, you only have to look at the likes of Nico or the glorious golden nugget that is Captain Crooks blogs to see how it should be done. I was bothered because all of my favourite ork armies all seem to have their own "identity", which makes them stand out from the crowd. So, I did what any impulsive willy would do and sold most of the old lot and started again:

Now, I'm sorry but theres no backstory to these lads yet, but I am working on something so bear with me. There are still individual unit shots though, so here they are:

The gaffer and his mega armoured bodyguard. These lads were loosely based on the cover art for one of the gospels of Orkness: 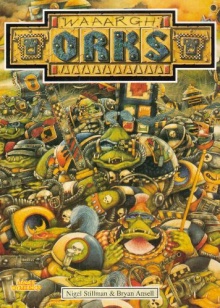 Its not perfect, but its close enough that I'm happy! The next unit both adds a bit of bulk to the numbers and acts as a wee love letter to the box that started it all off 25 years (jaysus) ago

Yup, them plastic Goff boys that everyone seems to own. Unfortunately they're not the original lads that I cut my teeth with, they're long gone, mutilated in the name of a twelve year olds creativity, but theres plenty out there and this is the first nine from my new pile. The tenth boy is a skarboy with brand spanking new necromunda goliath arms, that hammer is ridiculous on a human but I think its ideal on an ork!
Sneaking in to kill you in your sleep and cut your ears off to make a necklace, my take on Blood Axe kommandos. Well, I say my take but the idea was inspired by (totally lifted from) the aforementioned and formidable Nico. I just picked out the most military looking orks from the big box, did a small bit of converting, and here they are:

I have enough to expand this to a ten man (ork? Fuck it, whatever) unit, along with a lovely blood axe warboss to lead them but theres no mad rush to get them done, this is a nice easy personal project, not a deadline job.
Aaaand finally (phew says you) the first couple of oddboyz 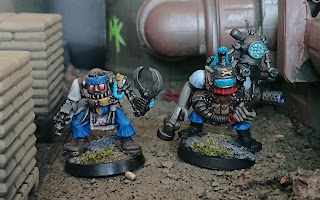 Both are my favourite examples of their craft, the painboy was repainted from the last attempt, the mek is a totally new job, I added a hammer arm from a spare mek and a little robot monkey/helper/forcefield projector or something to his shoulder. I love the idea of orks having little hangers on and helpers, and with luck there'll be more to see in the future.

So there we are, hope you enjoyed all that folks! Theres still plenty more in the big box to work through, so there'll most likely be another post on the mean green bastards in the future sometime, but who knows whats next here? I certainly dont. Look after yerselves and hopefully see you soon!