Hello there folks! Neglected the blog yet again, but with so much fantastic content being displayed by my fellow Combat Burgers I feel like I should make some sort of contribution to the cause. For those interested, but that haven't seen the sterling work on show, have a look here, here and here, along with some sterling ponderings over here, I've probably missed some, and I hope my fellow burgers will forgive me, but feel free to add the links in the comments and I'll edit accordingly!
Anyway, a while back I was thinking on how to add to my Saturday Morning Space Pirates mini project but was drawing a blank. I want a nice ensemble cast of ne'er do well anti heroes, travelling the system, righting wrongs (and wronging rights on occasion) ,and generally being great fun. I've mentioned before my love of Red Dwarf, so imagine the boys from the Dwarf smashed together with the A Team and you won't go far wrong.
Now as much as I want a good sized crew of lads (and lasses, calm down)  I'm being very particular about the models I'm using, as well as their paint schemes. I have a small pile of likely candidates, but as this project is very close to my heart I'm taking my sweet time making sure it all fits together. So, how do I keep the momentum of the project while still maintaining the standard I've set? With the baddies of course! Now as we all know, most cartoons involve one or two main bad bastards in charge of hordes of inept grunts who are only there to have their faces kicked off by the heroes, and given the theme of the project there was only one port of call: 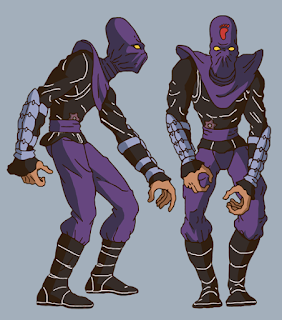 Yep, the good old foot clan from your favourite and mine, the Teenage Mutant Ninja Turtles! I spent many an hour watching the these lads getting the shit kicked out of them, and it's something that will make me very happy to simulate on the tabletop, so the next job was to find suitable models to represent them, and Moonraker miniatures had just what I needed: 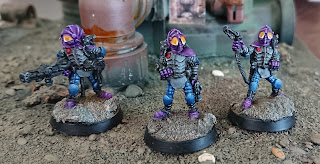 I've gotten three painted so far, with another three on the way at some point in the future, but right now I'm super happy with the results. Fair enough, they have space guns, but they're in space so fuck it! Following on from the theme, they needed a Shredder type leader to lead them to continuous defeat, so I raided an old project that I've semi abandoned (it was a bit too po-faced and serious, and that's not me) and I present to you (again), the renegade inquisitor Baal Revan 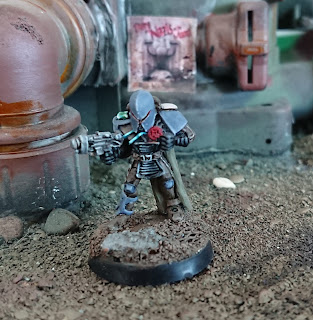 He should do nicely as a stand in until I find a more suitable evil "genius" to lead the drones anyway.
Last but not least is another refugee from yet another project, a slightly converted space marine medic who now follows Revan around repairing damaged drones and creating mutant hybrids to increase the evil forces (and the variety for me, there's a lot of tmnt characters that I'd like to port across) : 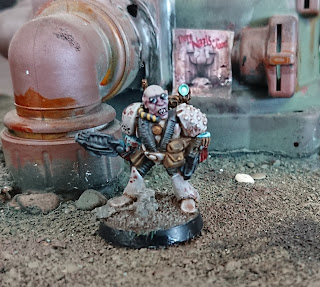 I think now that that's quite enough bollocks from me, but it's good to have a rough mission statement for a project that I can dip in and out of ,so here's to the next sporadic update! Any and all suggestions for expansion are most welcome by the way, I can't promise I'll use them all, but they will be appreciated! As always, thanks for looking and see yis all soon (well, soonish, I'm a terrible lazy blogging bastard)!